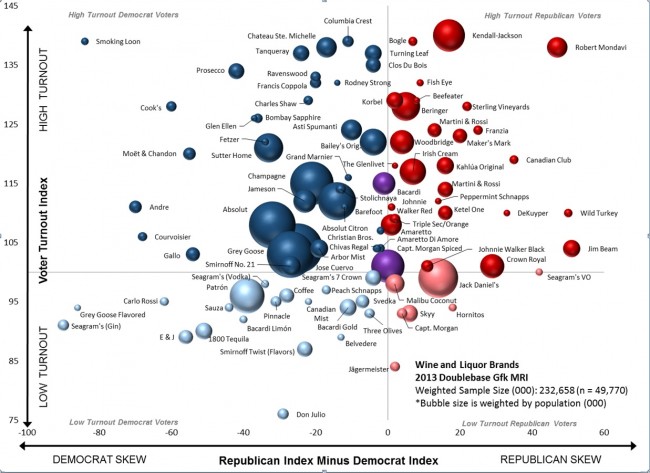 It turns out that your drink of choice may say more about you than that you have good (or bad) taste in spirits. Consumer data shared by the Washington Post indicates that your drink of choice may be a good predictor of where you fall in the political spectrum and of how likely you are to vote. For instance, Democrats in general tend to prefer clear spirits, while Republicans generally lean towards brown liquors. Jim Bean and Crown Royal are pretty far on the conservative end of the spectrum, while Grey Goose and Smirnoff are on the liberal end. Tequila and rum, particularly spiced rums, fall more or less in the middle of the spectrum. This chart (click to enlarge) will give you a full rundown on where a wide range of spirits fall.

It shouldn’t be surprising that wine drinkers are far more likely to vote than Jagermeister drinkers, since wine drinkers often skew older (and, one might guess, more interested in politics) than the clubbing crowd often asking for drinks with Jager and flavored vodkas. Also of note is the fact that it seems like for each spirit on the liberal side, there is a counterpart on the conservative side. The Dems have Bombay Sapphire, Bailey’s and Jameson, while the the Republicans have Beefeater, Kahlua and Maker’s Mark.

Of course, you’re not going to switch up a brand you like just because of where it falls on this chart – especially if you’re a fan of something, such as Hendrick’s, that doesn’t even get listed – but it is worth taking a look to see if what you normally drink actually does indicate roughly where you fall on the political scale.

What Your Spirit of Choice Says About You
Horoscopes are usually told by an astrological or zodiac sign,…

Which Glass is the Best for Champagne?
Coupe glasses are back in style and are being used…