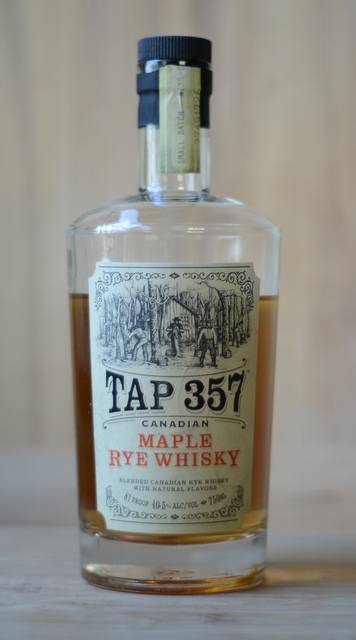 Tap 357 is a blended Canadian rye whiskey that is infused with maple syrup, combining two very Canadian flavors into one drink. The rye is made with a blend of cask-aged 3-, 5-, and 7-year old rye whiskies – hence the 357 in the name of the whiskey. The rest of the name is a reference to the maple syrup, which is “tapped” in early spring from trees in Quebec. The syrup is Canadian Grade 1 Light, which has a light maple flavor and color, so it doesn’t overwhelm the flavor of the rye.

Tap 357 is very smooth and easy to drink. It has a dash of woodsy spiciness to it, with a hint of both honey and maple that take the edge off the rye. Tap 357 seems to be a love it or hate it whiskey, judging by the reviews that I saw on some other sites. This is mostly because some people don’t read the packaging clearly enough to understand that this whiskey is infused with maple, not simply aged in maple barrels, as some other Canadian whiskies are. The maple makes it noticeably sweeter than your average whiskey and, if you’re not expecting it, it can be a bit of a surprise. It’s not sugar-sweet by a long shot, but it probably is sweeter than the other ryes in your bar. The vast majority of other reviewers are fans of the stuff and, once you taste it, it’s not hard to see why.

Worth another round? Definitely. Tap 357 is delicious. It has just the right amount of sweetness and a distinct maple flavor that, as a maple syrup lover, I really enjoy. It’s smooth, easy to drink and makes a great Old Fashioned if you want to do something with it besides serve it over ice.

Tasting Tuesday: Campari
Campari is a bitter red liqueur that is instantly recognizable…

Tasting Tuesday: Rudo Reposado Tequila
I know a lot of people who drink whiskey and…