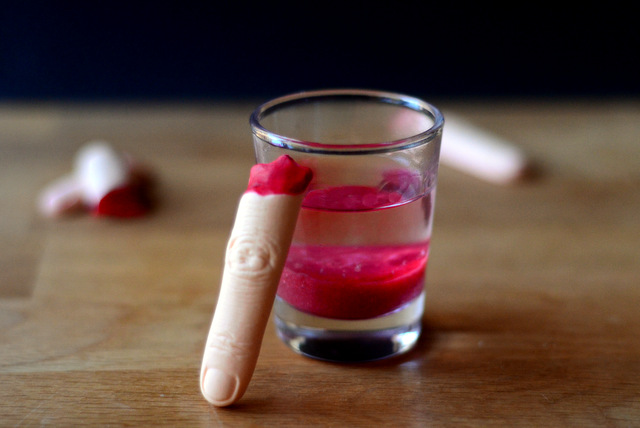 As much as I enjoy serving Zombie Brain Hemorrhages around Halloween, they’re not the only drink that is suitable for a Halloween celebration. I’m always looking for something new and recently found inspiration in some unusual cake decorations. These Bloody Finger Shots look like blood pooled at the bottom of a shot glass – an effect that is even more compelling if you pick up some of Wilton’s Severed Fingers (unquestionably the world’s creepiest cake toppers) to garnish the drinks with.

I admit that these shots are not as sophisticated as some craft cocktails, but I can guarantee that they’re going to cause quite a sensation with a crowd of Halloween party-goers or to a group of people who are fans of The Walking Dead. They’re made with raspberry puree, rum and a few dashes of bitters. It is tempting to use vodka to make these shots, but rum has a natural sweetness that works much better with the sweet-tart raspberry puree. I highly recommend using a flavored rum for these shots – I’ve used Bacardi Razz and Bacardi Pineapple Fusion, though many flavors will work well – because it helps to bridge the gap between the puree and the bitters, and it adds a little bit more complexity to the drink in general. The shots are sweet, spicy and leave you with a fruity finish that is good enough to make you want a second serving, even though the drink looks like it came straight out of a horror movie. 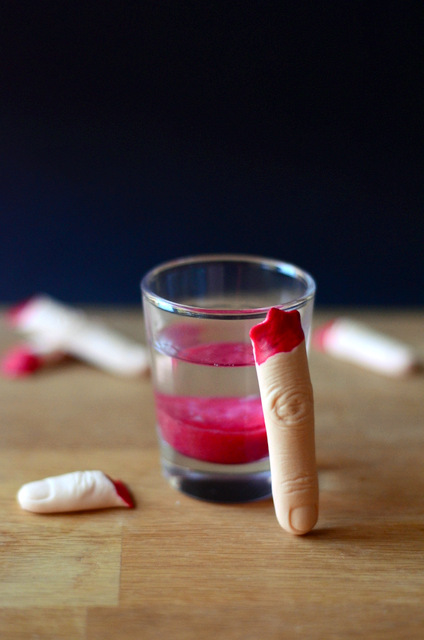 Pour the raspberry puree into a shot glass. Carefully layer the white rum over the top of the puree by pouring it over the back of a spoon. Top with two dashes of Peychaud’s Bitters to give the drink a reddish hue.

*I make my puree by combining 6 oz of fresh raspberries with 1/4 cup of sugar and blending it in the food processor. Strain to remove the seeds.