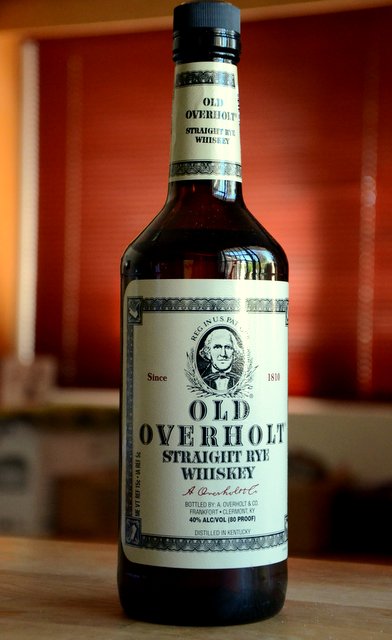 The name of Old Overholt Straight Rye Whiskey alone is usually enough to get people to pick up a bottle of this rye. It just has an air of authenticity to it somehow, and that serious stare from the portrait on the bottle just reassures you that you are making the right decision when you buy a bottle. The rye is distilled by A. Overholt & Co., which claims to have been established in 1810, but is now a subsidiary of Beam Inc. It’s a rye that has been around for a long time – long before this most recent craft whiskey movement, and that means that it is one of the few straight ryes that you’ll find on shelves today that you also would have found a few decades back.

This whiskey has a surprising amount of fruit in its aroma, and I could definitely pick out some apple and honeysuckle. It’s very pleasant and much sweeter smelling than you might expect from a rye. It has a nice rye flavor, just the right amount of oak and a hint of leather. A little bit of the fruit from the nose gets into the body of the rye, as well, so it has a touch of sweetness that makes it smooth and very sipable – especially when you add a little ice.

Worth another round? Yes. This is a staple in my bar because it’s a great all purpose rye. It is also very reasonably priced, which means its a good choice both for mixing into cocktails and for drinking straight. I like just about everything about this whiskey and have no problem picking up another bottle when I run out.