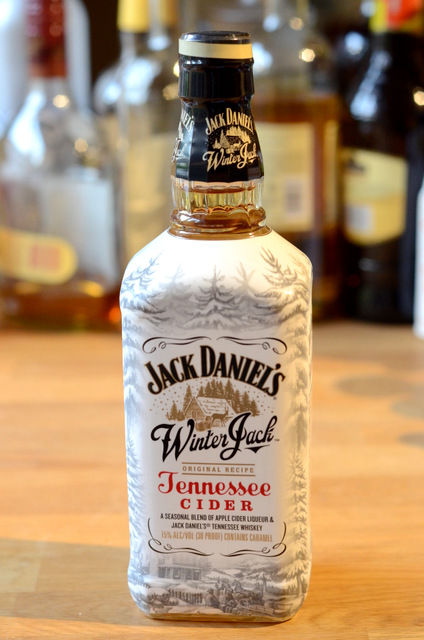 Seasonal releases are always fun to try because they offer a change of pace from the usual things you’ll find in the liquor store. Since they are geared towards specific times of the year, it is a good opportunity to pick up a bottle of something that will make a good addition to any holiday drinks you might have planned – no matter what holiday it might be. Jack Daniel’s Winter Jack Tennessee Cider is a very seasonal item from Jack Daniel’s, made using Jack No. 7, apple cider liqueur and infused with holiday spices. This is the first year that the liqueur has been available in all 50 states (and internationally in countries like Germany and Canada) and I was curious to give it a try when I finally saw it in person. The bottle is a classic Jack Daniel’s bottle that is wrapped with a white label that reminds me of holiday cards and snow days.

The liqueur has a hint of apple cider to it, but overall the aroma is very mild. You get a burst of fresh apple flavor when you taste it, however, along with a nice blend of spices like cinnamon and allspice, as well as distinct notes of oak from the whiskey. It tastes a lot more like apple cider than classic Jack Daniel’s, but you can detect the whiskey. The finish is short and sweet, leaving you with a lingering essence of apple. This isn’t a complex liqueur, but it is a pleasant one. It’s a fun holiday drink to have around if you are a cider fan.

Worth another round? Apple cider fans will really enjoy this liqueur. It is easy to drink and at 15% ABV, there is no reason that you can’t pour yourself a generous glass if you’re in the mood for some. That said, for me it is a bit of a novelty exactly because it is so easy to drink. The flavors aren’t bold enough to make this a good mixer, so it’s not all that versatile. You can, however, serve it both hot (surprisingly delicious, especially if you throw in a cinnamon stick) and cold so you will most likely not have any problem using up that bottle if you’re even doing the tiniest bit of holiday entertaining.