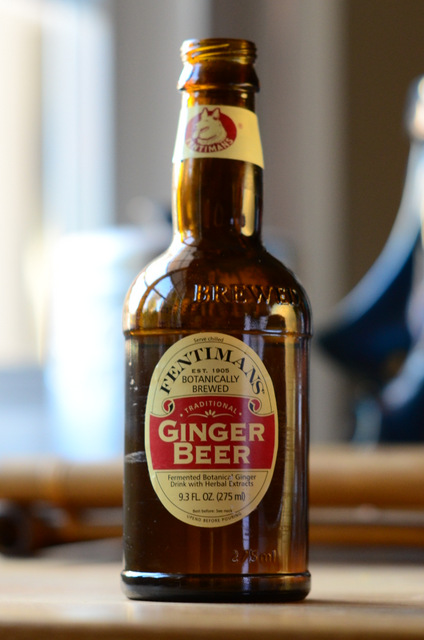 Ginger beer is an essential ingredient behind the bar. It’s true that you can make a lot of cocktails without it, but drinks like the Dark and Stormy and the Moscow Mule are always huge crowd pleasers, so it’s a good idea to keep it on hand. When I look for a ginger beer, I want one that is spicy and has a distinct ginger flavor to it, with a sharper and cleaner flavor than ginger ale. Fentimans Ginger Beer caught my eye while I was out picking up rum the other day. The recipe for Fentiman’s ginger beer dates back to 1905, when Thomas Fentiman began making and selling botanically brewed ginger beer in England.

The ginger beer has an earthy, funky flavor with a prolonged, but generally mellow, spice at the finish. It tastes very old fashioned, verging on medicinal, and lacks both the sweetness and the zip of some other brands of ginger beer. You can actually taste the history of the brand – and while that is an interesting feature, it’s not what I’m usually looking for in a modern day ginger beer most of the time. When used in cocktails, it really flattened out the spirit it was paired with, as its powdered ginger flavor dominated without elevating any other flavors. It was interesting – but I can’t say that this would be my top choice straight out of the bottle. For me, I’d need to pair it with citrus and some simple syrup to brighten it up and clean up some of those interesting earthy notes hiding in the background.

Worth another round? Unfortunately, this ginger beer is just not for me. But if you’re looking for something that is not particularly sweet or refreshing, or something with an authentic early 20th century feel, this might do the trick for you.

Tasting Tuesday: Larceny Bourbon
Larceny is a bourbon that I’ve seen at some well-stocked…