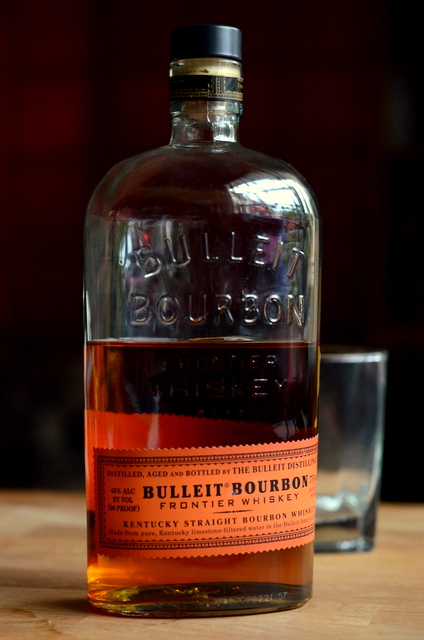 Bulleit Bourbon is a staple in my liquor cabinet. It’s a straight bourbon with a relatively high rye content of 28%, although Bulleit also makes a rye whiskey for rye fans looking for even more. I think the price point is very good considering the quality of the bourbon, making this a spirit that I like to drink straight and one that I also use for mixing cocktails because it adds just the right amount of complexity to a drink. Bulleit has a great nose, with some sweet dried flower notes in addition to a smokey wood aroma. There is plenty of oak and vanilla in this bourbon, though it is not aged, and a nice brown sugar sweetness and a complex spice to it. Anise stands out, along with orange, pepper, vanilla and even cinnamon. The finish is quite long and balanced, leaving you with a lingering spice flavor and a clean feeling that makes you want to take another sip.

Bulleit is something of a niche bourbon still, though it is very popular in craft cocktail bars, but it is owned by Diageo and rumor has it that they are planning to push the brand, which is made at the Kirin-owned Four Roses Distillery in Lawrenceburg, Kentucky, until it is much more of a household name in the next few years.

Worth another round? Yes. I like this bourbon on the rocks because I really enjoy its complex flavor profile. It’s just fun to drink. I like it even better in cocktails because its complex flavor goes well with many other ingredients and mixers, from orange in an old fashioned to coffee in an after-dinner drink.

Tasting Tuesday: Fever Tree Tonic Water
Tonic water is an ingredient that is used in countless…