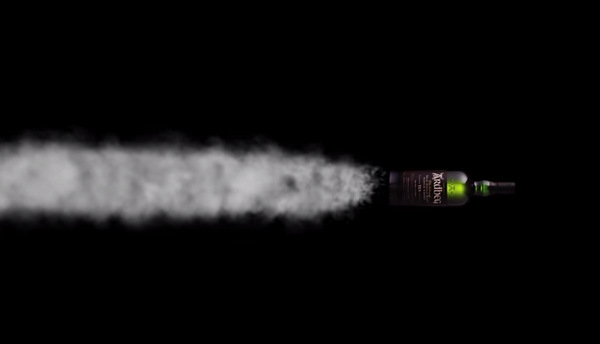 In 2012, Scottish whisky producer Ardberg packaged up some samples of un-aged whiskey and charred oak barrel shavings and sent them to the International Space Station with the help of a company called Nanoracks. When the samples arrived at the station, they were combined with the oak shavings and allowed to age. At the same time, a sample of the same product started to age back on Earth. The whisky spent over two years in space before being sent back down for extensive testing.

Researchers found that there were very few differences in the makeup of the whiskys, however they noted that the flavor and aroma of the samples – space-aged vs earth-aged – was very different. It turns out that space-aging whisky introduced flavors that Dr. Bill Lumsden, Ardbeg’s director of distilling hadn’t encountered before. Analysis revealed “a very focused flavour profile, with smoked fruits (prunes, raisins, sugared plums and cherries), earthy peat smoke, peppermint, aniseed, cinnamon and smoked bacon or hickory-smoked ham. The aftertaste is pungent, intense and long, with hints of wood, antiseptic lozenges and rubbery smoke.”

You can watch more here to learn all about the experiment:

It is also worth noting that, though Ardberg was the first distillery to ship their whisky into space, they aren’t the only ones. Suntory recently shipped a variety of products to conduct more tests. Might this usher in an era of Jetsons-style whiskys? Probably not until space travel gets a bit cheaper, but it is something that some producers certainly see on the horizon.