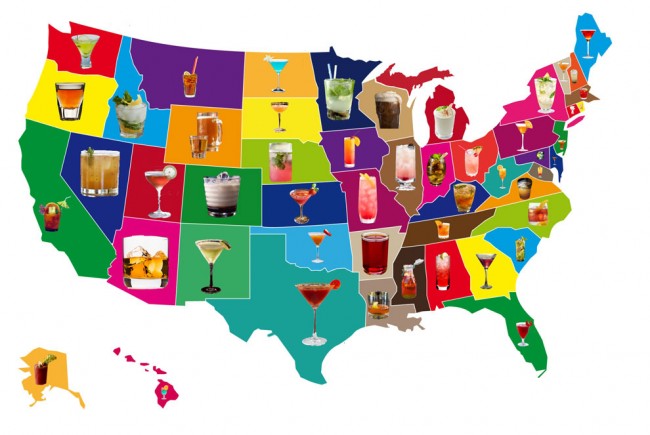 There are state flowers, state birds and even state foods. It is high time for state cocktails to get on the map, and Buzzfeed decided to save the state governments some money by putting together a map of signature state cocktails. While it’s true that many cocktails have rather murky origins, it is also true that there is a lot of mythology associated with them and every one can be attributed to at least one location (the popular ones are often attributed to more). So what is your home-state’s signature cocktail?

It really is too bad the Moscow Mule is New York’s signature cocktail here, given that the drink was popularized in Los Angeles at the Cock ‘n’ Bull restaurant in the 1940s and was a Hollywood hit long before most people on the East Coast had heard of it. The Manhattan, a drink with much longer ties to NYC, might have been a more obvious choice. That said, I’m on board with many of the drinks on this list and think it is a good starting point for states to start thinking about signature cocktails. After all, we might as well pick the ones we want so that they don’t get assigned away to a rival state and leave us picking from the leftover drink options.

Whiskey Wedge
I tend to drink whiskey neat, though I’ve been known…
There is 1 comment for this article