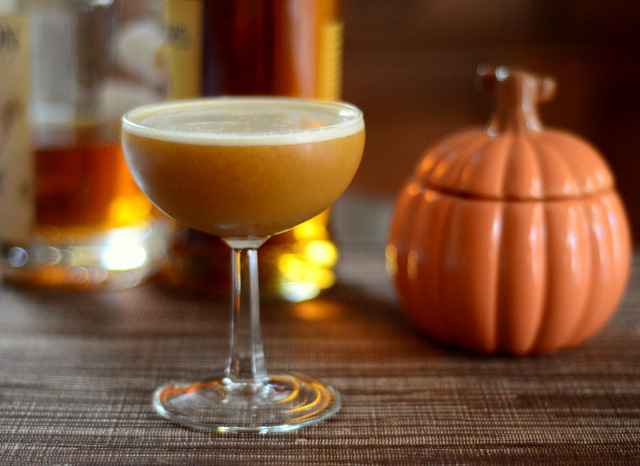 A flip is a type of cocktail that includes eggs, usually whole eggs, to give the drink an unusually smooth and creamy texture without adding cream. Flips used to be quite common, but raw eggs in drinks simply aren’t as popular as they used to be. Fortunately, you find pasteurized eggs – either the bottled kind or in-shell pasteruized eggs – very easily these days, which puts flips firmly back on the menu. A great seasonal flip is the Pumpkin Flip. This cocktail is a liquid pumpkin pie and, unlike the pie that inspired it, it gets its velvety texture from the inclusion of an egg white.

This is a bourbon based drink and a sweeter bourbon tends to be a better choice because it highlights the pumpkin without dominating it. It gets spice from allspice dram and sweetness from maple syrup, and I like to add in a bit of both vanilla extract and orange bitters to bring a little extra dimension to the drink. The finished cocktail is garnished with a dusting of cinnamon, so you get a whiff of that spice on the nose as you take a sip. You’ll feel like you’re drink a bourbon-spiked pumpkin pie. That said, the drink itself isn’t overly sweet, so don’t feel like you automatically need to save this one for dessert, even though it goes extremely well with almost any fall dessert you might be able to think of. 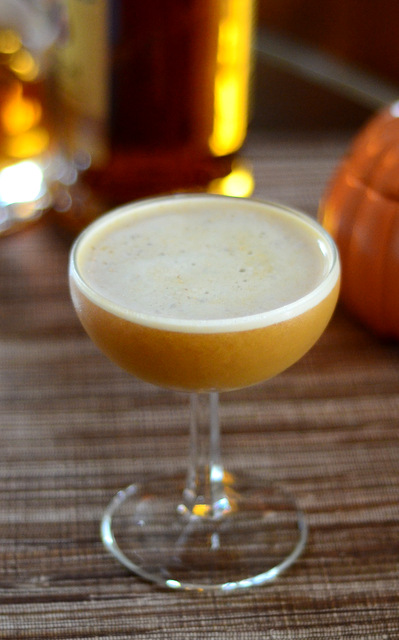 Combine all ingredients in a shaker and fill with ice. Shake vigorously until mixed, chilled, and frothy. Strain into a coupe and dust with a sprinkle of cinnamon or nutmeg.