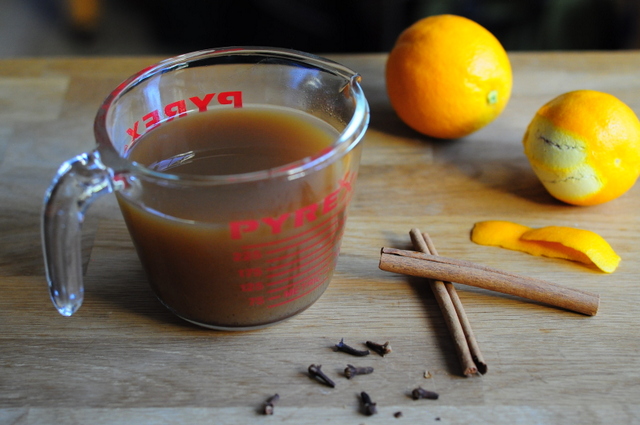 Some people prefer eggnog, but nothing says “holiday season” to me the way that Mulled Apple Cider does. Mulled cider is cider that is infused – or mulled, to use an old fashioned word – with spices and citrus, and is lightly sweetened to bring all those flavors together. You can buy spiced cider in many stores during the holidays, but none compare to homemade spiced cider.

My homemade cider starts with good quality unfiltered apple juice. Unfiltered juice will look a little cloudy and should be made from real apples, not apple concentrate and corn syrup. I add cloves, cinnamon, allspice, nutmeg and vanilla, as well as orange peel and a touch of maple syrup. As they’re infusing the apple juice, your kitchen will start to smell like the holidays. This recipe makes a small batch of cider, but you can increase the ratios to make enough for a crowd. The cider can also be prepared a few days in advance and stored in the refrigerator, than reheated before serving.

Place all of the ingredients into a medium sauce pan. Bring to a boil then reduce the heat and simmer for 5 minutes. Remove from the heat, cover, and let steep for 30 minutes. Strain into cups and serve with a cinnamon stick for garnish.

Meyer Lemon Lemonade
Meyer lemons aren’t your standard lemons. They’re actually a hybrid…
There is 1 comment for this article