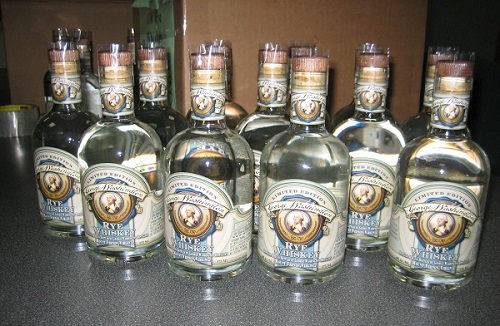 George Washington was a man who liked his whiskey – so much so that he had his own distillery at his home at Mount Vernon. He also kept detailed records of his recipe, which prompted Mount Vernon to restore that distillery to working condition and start producing some presidential whiskey from the first president’s recipe. They are using the same grains he used – 60% rye, 35% corn, and 5% malted barley – and the whiskey is fermented in 120-gallon oak barrels then double distilled in copper pot still, as it would have been during Washington’s lifetime.

The whiskey is unaged and master distiller, Dave Pickerell, described ‘its nose as “lightly floral, earthy, and grainy,” with a taste that is “surprisingly sweet and mellow.”’ More than 1,100 bottles have been produced and they will be on sale starting April 14th. You can read all about the process of creating the whiskey at Making George Washington’s Whiskey. And if you’re in the neighborhood, you can tour the distillery if you visit Mount Vernon, in addition to picking up a bottle of presidential spirits at $95 a bottle.