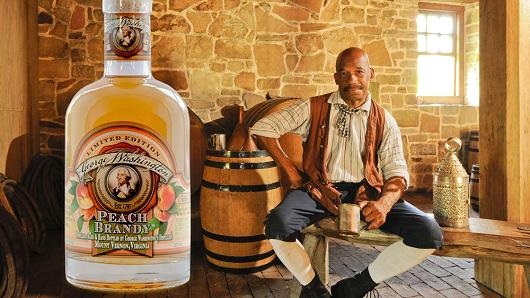 George Washington was a whiskey fan. He didn’t just drink it, he made his own at a distillery that he had built at his home at Mount Vernon. A few years ago, Mount Vernon restored the distillery to its original working condition and started to brew whiskey made with Washington’s original recipe, which he kept detailed records of. In addition to whiskey, Washington also distilled other spirits, including a peach brandy. The brandy was produced in very small quantities – just 60 gallons of the popular spirit each year, compared to the 11,000 gallons of rye whiskey – and it was primarily served at the estate, rather than being sold.

It has been more than 200 years since brandy was produced at Mount Vernon – but with the help of craft distillers, it is being produced again. A limited run of 400 bottles of George Washington Peach Brandy will be released on Tuesday, April 1. Unfortunately for some, the brandy will only be available at the Gristmill Shop at Mount Vernon and will not be sold online or in stores. The bottles will sell for $150 per 375 ml bottle and are likely well worth the drive if you live within driving distance of Mount Vernon.

Vegas nightclub pours $1500 and $2000 drinks for big spenders
In most places, customers often about the price of the…