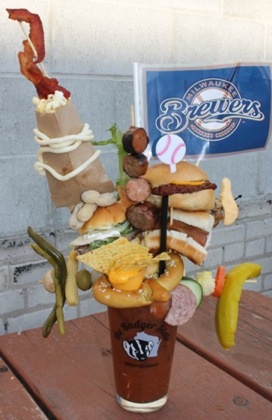 Bloody Marys are often considered to be good hangover cures, as are the fat and grease that are delivered in bacon and sausage-laden diner breakfasts. Usually the drink and the grease are separate – but at one Wisconsin pub, they are combined into one ridiculously over-the-top drink.

It has often been said that Wisconsinites love their meat, cheese and booze and this impressive rendition of a bloody mary served at O’Davey’s Pub in Fond du Lac, Wisconsin proves it. The drink starts out as a relatively normal looking bloody mary, to which multiple skewers of garnish are added. The garnishes include popcorn, several types of pickles, sausages, nachos (i.e tortilla chips with cheese), bacon, peanuts, beans, string cheese, a soft pretzel, mini cheeseburger sliders, a cracker and a cheese curd. And you can’t forget the Milwaukee Brewers flag that tops it all off. It looks more or less like an entire bar food menu coming out of one cup. The drink can be had for a mere $5, but it is only served on the first Sunday of every month, so mark your calendar if you’re in town and want to see if you can finish the whole drink.