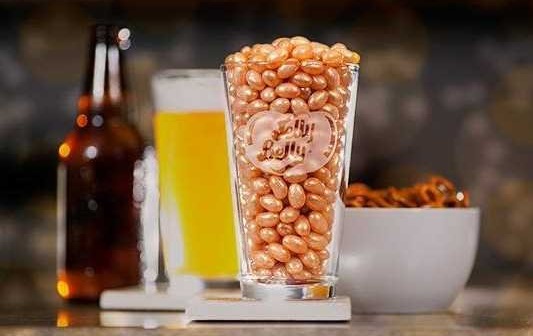 Jelly Belly has always been known for coming up with creative flavors for their popular jelly beans, from traditional berry and fruit flavors to their more recent Soda Pop Shoppe and Cocktail Classics, which feature Margarita and Mojito jelly beans. Their newest addition to their lineup is beer-flavored: Jelly Belly Draft Beer Flavor Jelly Beans. The beer beans are made to deliver the “effervescent, clean, crisp and wheaty taste” of a German Hefeweizen ale. Though they are beer-flavored, the beans are not alcoholic and are safe for Jelly Belly fans of all ages to eat.

Naturally, some people are not fans of the idea of a beer jelly bean, worried that kids might become hooked on the flavor of beer after tasting them. Since the beans are nonalcoholic, it’s much more likely that anyone eating them will become hooked on sugar, not beer, as a result. Candyblog seems to back that up, since she already got a package to try and reported that the beans are “mild with a note of bread, honey and roses… no hop bitterness at all” and that while they are enjoyable (earning a 7/10 from her), it sounds like beer drinkers who are looking for the real flavor of beer better stick with the real thing.

Early Times launches Limited Edition Hunter’s Whisky
I’m not a hunter, but have had friends who hunt…