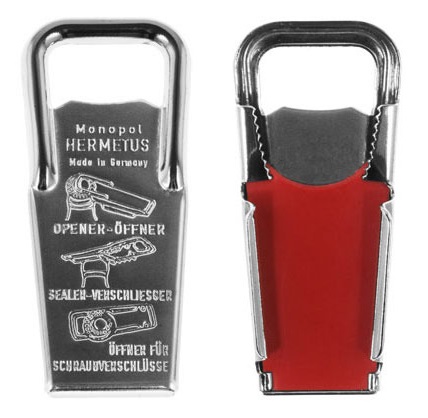 When you pop off the metal cap on a bottle of beer, cider or some other carbonated beverage, the first sip is usually the best. The drink is at its coldest and most carbonated – and it generally goes downhill from there. If you drink it within a few minutes, you won’t have too many problems, but if you prefer to sip your drinks slowly, you’ll find that there is always some left in the bottle that is no where near as good as those first few sips.

I don’t want to chug down any drink – I want to savor them, so this Hermetus Bottle Opener and Resealer caught my eye as a way to make that happen. The gadget will pop off any standard bottle cap and works on both 26 mm caps (US standard), 29 mm (craft and large European beers) bottles. Once you’ve opened your drink, flip the tool over and slide it firmly into place over the bottle’s opening. The rubbery portion of the resealer will create a completely airtight seal while the metal grips around the edge will hold it in place – so not a drop will spill even if you leave the bottle on its side or upside down. It will stay crisp and fresh until you’re ready to open it up and pour another glass.

What is Ginger Beer?
Ginger beer is a carbonated drink that is flavored with…

What is a shrub?
A shrub is a fruit and vinegar syrup that is…

Johnnie Walker’s new spokesman is Bruce Lee
In China, the government has been cracking down on luxury…