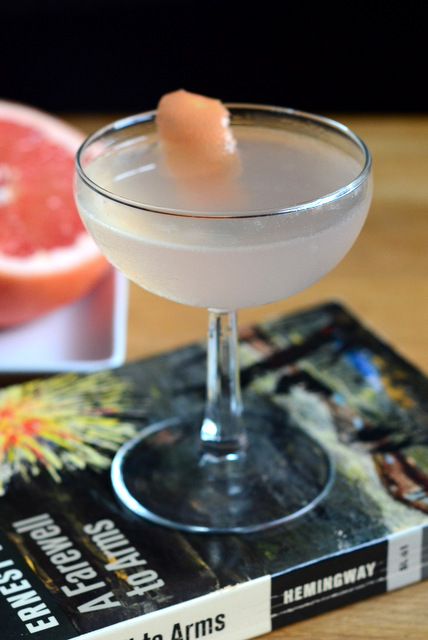 The story of the Hemingway Daiquiri is that it was invented by Ernest Hemmingway at the El Floridita bar in Havana, Cuba. He stopped in for a drink and called for a daiquiri made without sugar, with twice the rum and with plenty of crushed ice. Since a traditional daiquiri is only made with three ingredients, this would translate to a fairly tart, strong cocktail – and anyone who has made a Hemingway Daiquiri in the past few years can tell you that it tastes a lot better than a glass of rum and lime juice alone. There is a lot of debate between historians about what drink Hemingway actually drank and who invented it. You can be fairly certain that the current rendition of the cocktail is not what Hemingway drank the first time he encountered it, but you can still raise a glass in toast to the man that inspired it when drinking one.

These days, the cocktail is made with rum, maraschino liqueur, lime juice and grapefruit juice, with a spash of simple syrup to cut the bitterness of the citrus and highlight the cherry. It’s complex and refreshing – and it is also quite strong, so it just might get your creative juices flowing in the same way that the original version did for Hemingway.

Pour all of the ingredients into a shaker filled with ice. Shake and strain into a chilled coupe. Garnish with a grapefruit peel.

Kir Royal
Crème de cassis is a sweet, red liqueur made from…

Maple Vanilla Soju Cocktail
Soju is one of my favorite spirits to work with.…