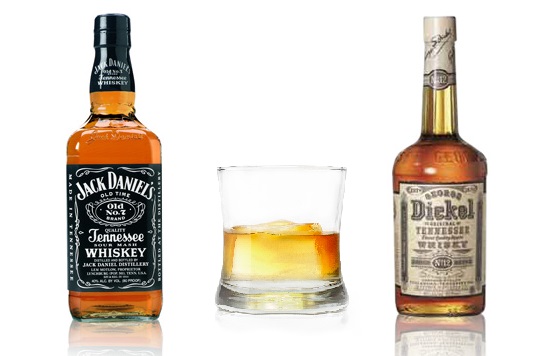 Tennessee whiskey is straight bourbon whiskey produced in Tennessee, and it is typically called Tennessee Whiskey” rather than “bourbon” on the label. Tennessee whiskey is one of the states largest exports, with more than 1 billion dollars in sales in 2013, and there are two major producers of it: George Dickel and Jack Daniels. Jack Daniels, owned by Brown-Forman Corporation, is the larger of the two brands. George Dickel is owned by Diageo, which is the larger of the two parent companies.

Jack and George are currently fighting the whiskey wars in Tennessee to see who will come out on top and take a large share of the Tennessee whiskey pie.

In May of 2013, the Tennessee governor passed a bill requiring charcoal filtering (also known as the Lincoln County process to be used for all products labeled as Tennessee whiskey, and required that the products be made from at least 51% corn and aged in new charred oak barrels. Most distilleries in the state opposed this bill, as they said the the process required by the law was too close to the process specifically used by Jack Daniel’s.

In 2014, Diageo supported new legislation to allow for the reuse of barrels in the aging process. This reversal of part of the previous bill would also make whiskey-making more affordable and open up different flavor profiles to smaller producers. Jack Daniels fought the proposed amendment and it has not yet passed.

Now, Diageo has filed suit against the state of Tennessee over a much older law that requires all whiskey to be stored in the county, or the county adjacent to, where it was produced. Shifting county lines may have actually caused some distillers problems in the past with this piece of legislation, but the suit is also an effort to have the definition of Tennessee whiskey looked at again – and perhaps giving a revision that would be favorable to all producers and not heavily favor one brand over another.

What are barrel aged cocktails?
House made shrubs and custom or small-batch bitters are just…