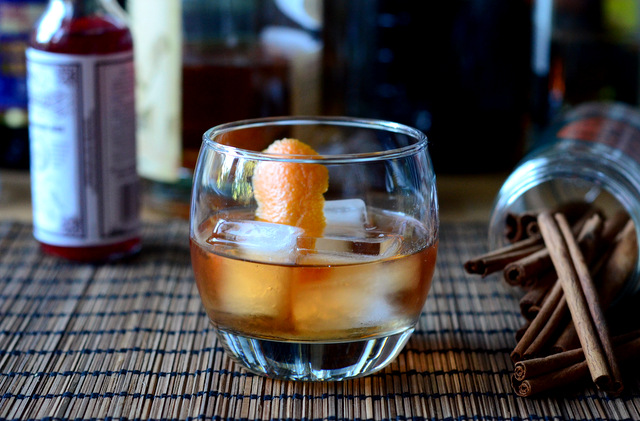 During the fall, I expect to see shorter days, enjoy crisper nights and taste a little bit more spice in my food and drink. When I say “spice”, I’m not referring to the heat of peppers, but to spices like cinnamon, cloves, nutmeg and allspice that are generously used in everything from oatmeal cookies to Pumpkin Spice Lattes this time of year. The warm spices will make anything taste like the fall and holiday season – including a classic old fashioned cocktail.

This Cinnamon Spiced Old Fashioned is a slightly variation on a regular old fashioned that uses a Spiced Simple Syrup to sweeten it and add just the right hint of autumn to the bourbon. This homemade syrup is infused with cinnamon, cloves and vanilla bean, and it delivers a wonderful flavor even in small amounts. You’ll be amazed at how just a teaspoon or two can take a year-round drink and transform it into something perfect for the holiday season. I actually recommend making a big batch of the syrup, since you’ll probably want to add it to your coffee and other cocktails, too.

I generally use bourbon when making this cocktail. That said, you can use either bourbon or rye in your drink, depending on what you have in your bar and what you feel like drinking. The syrup will highlight those oaky vanilla notes in both spirits the same way and make for a very delicious drink.

Pour the whiskey and the cinnamon syrup into an old fashioned glass. Now add two dashes of bitters and ice. Stir until combined. Cut an orange peel, squeeze it over the drink and drop it in for garnish.