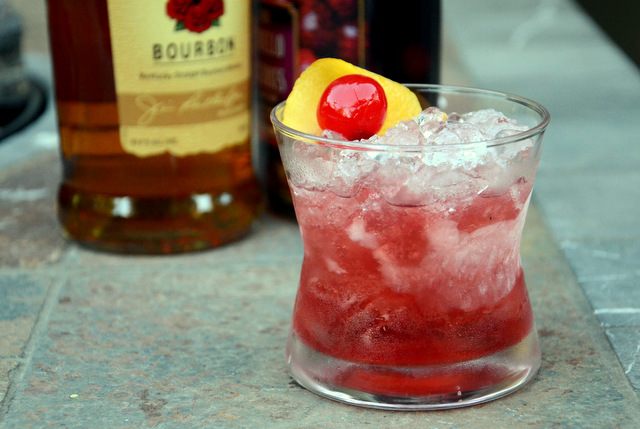 The original swizzles were simple Caribbean cocktails made with rum and lots of shaved ice. They were stirred with a “swizzle stick,” a long stick with four or five short prongs at one end that was made by breaking off the branch of a nearby tree. When the stick was inserted into a drink and spun vigorously between the palms of the hands (picture someone trying to start a fire the very old fashioned way), it chilled the drink down rapidly and a thin layer of frost formed on the outside of the glass. The originals may have been  rum drinks, but there is no reason you can’t swizzle a cocktail made with other spirits. Given the increase in popularity of swizzled drinks – perhaps because people enjoy saying the name so much – I find that I’ve been swizzling a little more lately, as well.

This Bourbon Cherry Swizzle isn’t a rum drink. It’s a bourbon based drink that is idea for those hot days that come between the end of summer and the beginning of fall. In addition to bourbon, it includes cherry heering, lemon and sugar, with a dash of bitters to add a little hint of autumn spice and as a nod to those original swizzles, which often added a dash. Cherry and bourbon is always a good combination, and the lemon brightens the whole thing up and ensures that you’ll taste just the right amount of both cherry and bourbon in each sip. I used Four Roses in this cocktail, but another sweet bourbon will work nicely, and a spicy rye is a good choice, too. Swizzling will blend and soften the cocktail, leaving you with a drink that is the color of autumn leaves that is ideal for everyday celebrations all season long. 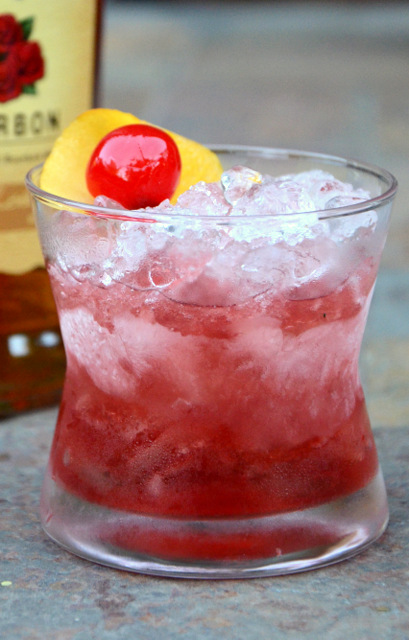 In an old fashioned glass, combine all ingredients. Fill with crushed ice and swizzle until glass frosts. Top with additional crushed ice. Garnish with a lemon peel and a cherry.