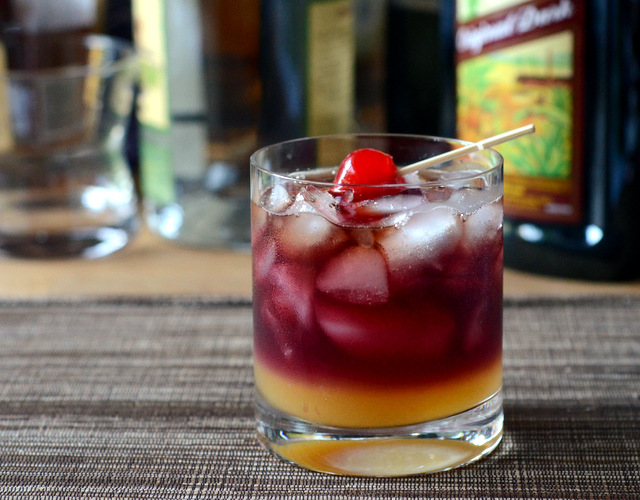 The Bishop’s Cooler is a cocktail that I discovered not too long ago in an old cocktail book that featured a number of tiki-style recipes from the 1940s. The drink jumped out at me because it sounded like a kind of sangria – and I always enjoy a nice sangria on a warm afternoon – but with a rum float to top it off. I played around with the original recipe given in the book, which called for vague measurements that are great if you’re mixing a drink at home, but less-than-ideal when you’re trying to make a recipe that is easy for readers or bartenders to replicate. The original recipe had some great flavors and just needed a little balancing to bring out the best of the juice, the wine and the rum – and the resulting cocktail is a great twist on sangria.

I used an oaky California zinfandel for this cocktail, which gave it some nice body, though a less bold wine would result in a slightly sweeter drink. Use a dark rum, like Meyer’s, to get that sweet molasses flavor into the float. Trying to substitute a light rum, like Bacardi, would only up the alcohol content without improving the flavor of the drink. The cocktail is layered in the glass before serving, which results in a very attractive presention. That said, it is best to give it a little stir with your straw before taking that first sip to blend the flavors just a bit. 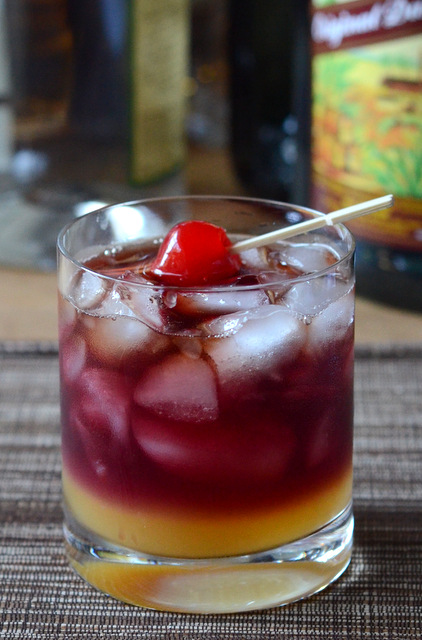 Fill an old fashioned glass with ice. Pour in lemon juice, orange juice, triple sec and simple syrup. Stir to chill and combine. Pour in red wine and float the dark rum on top. Garnish with a cherry.

Orange Maple Smash
Smashes, like juleps, are usually made with mint. They’re always…