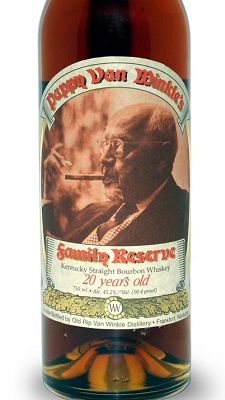 Fans of Pappy Van Winkle Bourbon will be saddened to hear that 65 cases of the sought-after spirit were reported stolen this week from a secure area at Buffalo Trace Distillery’s Frankfort, Kentucky distillery, where the bourbon was being aged. The theft appears to be an inside job and most likely took place over a period of a few months (since it’s hard to smuggle that much bourbon under your shirt!), but the loss was only reported this week. Two types of bourbon were taken: $25,350 worth of a cult-favorite 20-year-old bourbon that normally retails for about $130 a bottle and $675 worth of a 13 year old reserve rye.

More bourbon is being produced every day that will end up aging in barrels, but you can’t easily replace 20 years of aging, so the bourbon is likely to be in short supply until next year rolls around and a few more barrels hit the 20 year mark.